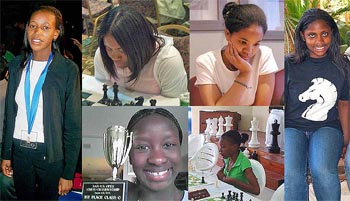 Women’s chess has come a long way since the days of old when the only women at a tournament were spouses. In 2005, many more females can be found “behind the 64” … and they are fierce! Perhaps the strongest female ever to sit at a chess board is Hungary’s Judit Polgar who is currently ranked #8 in the world. Her talent and determination to prove herself equal in a male-dominated sport has not only paid dividends, but has provided younger girls with a viable role model. Linda Nangwale, a player from Zambia was interviewed at the 2002 Olympiad by Women’s International Master Jennifer Shahade and was asked who her favorite player was. She replied:

“Judit Polgar. It’s really exciting to be playing here in the same event as she. I thought Judit Polgar was great before I knew she was a woman. I saw some games in Zambia — J. Polgar vs. V. Anand — and I was speaking about this great game, and somebody told me that J. Polgar was a woman, and I was so excited.”

This trend has become much less a novelty as much has been done to promote the sport of chess among the female populace. Around the world, many are playing chess, but the problem seems to be how to keep them interested in improving after age 18. In the U.S., two stars were born (Baraka Shabazz and Bernadette Reddick), but eventually faded. Nevertheless, there are some exciting talents currently gracing the tournament halls around the world. Within the last few months, many have made breakthroughs in their play. Stephanie Ballom of Texas has distinguished herself by winning a $40,000 chess scholarship!

Word from John Tobisch out of England is that there is another rising star on the horizon. Lateefa Messam-Sparks of Nottingham, England, just won 1st place overall in the UK Chess Challenge in the under-13 group. The girl of Jamaican ancestry also has won a county championship.

Galaletsang Mooketsi of Botswana is the Junior & Senior Champion, a title that both boys and girls compete in. She is the first person to ever achieve that since Ignatious Njobvu, who went on to become one of the nation’s top players.

A couple of years ago Yvonne Sainaof Zambia, then 15 burst onto the scene, but not much has been heard of her since winning a “best game” prize in the Zone IV Tourney last year. With the 2005 African Championships being held in Lusaka, Zambia this November, this could be her breakthrough moment.

In many of the discussions emerging thus far, it has been said that as girls mature, they no longer have the desire to compete in chess. Certainly, there are more role models than ever before and several of the younger females mentioned above aspire to become Grandmasters. What is often lacking is the competitive environment. Mudongo will travel to Cuba to undergo chess training at the university. Parrilla has gone on record to say she wants to be the first African-American female Grandmaster. With so many players emerging, she’ll have her competition.