Since its inception, chess has taken on a mystical persona and those who have excelled are often held in a higher intellectual regard. Thus, chess is often used as a symbol of intellectualism. Ironically, a recent study has shown that chess does not require an extensive use of intellectual faculties, so perhaps the common notion of chess being reserved for intellectuals will finally be disproved. Most chess players realize that chess is not merely an intellectual exercise. If that were so, then the game could be “solved” and would have to be remade. Chess involves something deeper and more complex than intellectual prowess which is one reason why computer chess competitions have yet to capture widespread interest.

The key question raised here is, “What is actually going on in the mind while playing chess?” Not on the intellectual realm (e.g., calculating variations and strategic planning), but on psychological and metaphysical realm. If psychology refers to understanding human behavior, then metaphysics refers to understanding the fundamental nature of all reality or in a word… the truth. Reality is governed by universal laws which we strive to perceive, understand and manipulate for self-preservation. The vehicle through which we are able to perceive, understand, and manipulate these laws is the mind. How does this relate to chess? Chess is one such activity that forces us to engage in an “internal dialogue” with the self or the mind. It has become a way of materializing our subconscious mind into the physical realm. Every time we play chess, we are able to “see” and “examine” our minds.

What is the Truth?

Do chess players enter a different realm when engaging in such an intense mental discourse? One will recall that in the classic chess movie, “The Luzhin Defence,” the main character was calculating the winning combination. As he analyzed the position, the variations flashed across the board as if the pieces were animated. The whole movie was about a chess genius in search of truth in himself. Of course one is not suggesting the use of telekinesis in chess, but the imagery was indeed powerful in demonstrating the extent of how the mind works in searching for the truth.

What is certain is that each person’s mind has a life apart from the physical being. However, these two components constitute a duality. It has been said (by many) that if one masters the mind, then the physical body can be made to perform at super-human levels. One can clearly see this in the realm of martial arts which springs from the roots of ancient Chinese philosophy and thought. Much of the commonalities of ancient philosophies and religions center on one thing… finding the truth. Thus, this is similar to a chess players attempting to find the truth in a given position.

In an interview titled, “The Mind of a Grandmaster,” GM Maurice Ashley states,

“There comes a point in chess where the truth is more important than the principle. I think a lot of players are guided by principle… two bishops are good; rook on an open file; doubled pawns are bad; don’t leave your king in the center. I think that a big difference between Grandmasters and lower-rated players is that those principles are only guidelines… they’re not the truth. They may help you GET to the truth, but a lot of times they may stand in your way of understanding the truth. Grandmasters are much more comfortable with exceptions to the rule and able to FIND more exceptions to the rule. So that with a Grandmaster, it won’t seem shocking because he breaks a principle… but the Grandmaster isn’t sweating the principle. They’re sweating to finding what the best continuation is… the most accurate one.” 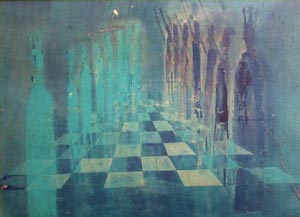 GM Ashley once mentioned that after attaining a certain level of skill, one no longer sees chess figurines moving about the board. The pieces become forces of energy that are to be employed in an efficient manner. In yet another interview, he mentioned the attributes of time, space and force as key interlocking principles in chess. Of course, these attributes can be understood in both the physical (e.g., time on clock, positional space on the 8X8 matrix, attacking initiative) as well as metaphysical realm (e.g., elevating to a higher plane during deep concentration).

Certain traits of our personalities and subconscious thoughts emerge during play. Every time we play chess, we are engaging in an affirmation of self. Perhaps this is why players may be very upset when losing a battle at the chess board. The faults that reside safely in the corners of our minds are brought out into the physical realm for all to see. How much of the subconscious mind can one see by examining one’s chess games? Is the mastery of chess an ultimate measurement of attaining mastery of one’s self or is it merely a game to be played and enjoyed at the sport level? These eternal questions are certainly reasons why chess can be considered not only a game, art, or sport, but also a science.