“A tower of nine stories begins with a heap of earth. The journey of a thousand li starts from where one stands.” – Tao-te Ching 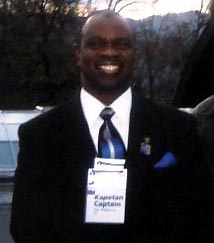 The 35th chess Olympiad in Bled, Slovenia was the biggest hitherto and, arguably, the most successful to date. The following is an attempt to share some of what transpired in Bled from the writer’s perspective.

Jamaica’s journey to the 35th Olympiad held in Bled, Slovenia began with the very first steps by the country’s “chess ambassadors” to the Norman Manley International Airport in Kingston, Jamaica on the night of Wednesday 23rd October, 2002. There were two teams in the Jamaican contingent comprising seven men. Before the Air Jamaica “lovebird” jet took to the air for England, there was excitement on board as a patently drunk and rowdy passenger had to be physically escorted off the aircraft. Were there to be more exciting times ahead?

After a smooth flight and marvelous landing at Heathrow airport we journeyed via bus to Gatwick airport for the Air Adria flight to Slovenia. Interestingly, while passing the time in trans, members of the Zimbabwean team (including IM Robert Gwaze) joined our party. Who would have thought that Gwaze would leave such an indelible mark on the Olympiad? I should have known, however, as I recall seeing the hunger in his eyes, especially when he asked if he could play a few blitz games against us in the airport.

We arrived in Slovenia about midnight local time with our Zimbabwean counterparts and had to wait a couple of hours for our visas to be processed. Our arrival was soured by the discovery that our luggage was delayed. It was extremely cold, almost sub-zero temperatures. The luggage came a day later.

We checked into the Hotel Krim, a 50-year hotel with 115 rooms. In the next couple of days we discovered that there were players from many other countries also staying at there, including people from Russia, Cyprus, Yugoslavia, Barbados, Aruba and Costa Rica. Our stint at the hotel was comfortable.

“For many persons it was exciting to be rubbing shoulders with all these individuals whom one would only normally see, hear or read about on the web or some other medium.”

The opening ceremony was held on Friday the 25th October, 2002 in the great sports hall which was to be the site for the games/matches. This was a very colourful affair highlighted, for me, by two sets of dancers, one in black and the other in white outfits. The dancers were dressed as chess pieces dancing on a floor decorated as a large chess board.

Many influential persons in the chess world were present including Honorary President (and former FIDE president) Florencio Campomanes (whom I noticed during the rounds watching the games of Eugenio Torre and other players from the Philippines) and a number of prominent grandmasters such as Garry Kasparov, Ruslan Ponomariov, Peter Leko and Judit Polgar.

For many persons it was exciting to be rubbing shoulders with all these individuals whom one would only normally see, hear or read about on the web or some other medium.

Before the Olympiad began there was a meeting of the captains for all the teams. This meeting was chaired by the Chief Arbiter, the affable Dutchman Geurt Gijssen (pronounced “hurt hi-sin”). Also present was Boris Kutin, the director of the Olympiad and president of the technical commission which had the responsibility of ensuring that there were no technical glitches. At this meeting the rules of play, time controls, roles of the captains etc. were discussed. It was refreshing to see the organizers trying their best to accommodate the wishes of the teams. 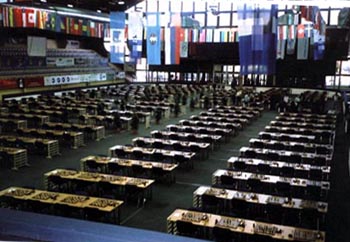 The Procedure before the Matches

Before each round, each team had to submit its “team composition”, that is, the persons who would be playing that round. The men played on four boards and the women on three. One point was awarded for a win, half a point for a draw and zero for a loss. The time control was game in 90 minutes with 30 seconds increment per move.

For the first two or three rounds the matches began at 2:00 pm. This was later changed to 2:30 pm after a second meeting of all the captains, again chaired by the Chief Arbiter. Similarly, after the first few rounds each team kapetan had to submit his team’s composition for the next round by 9:00 am on the playing day. The full list of persons playing would then be published by about 11:00 am, allowing only a couple of hours for preparation against confirmed or specific opponents. 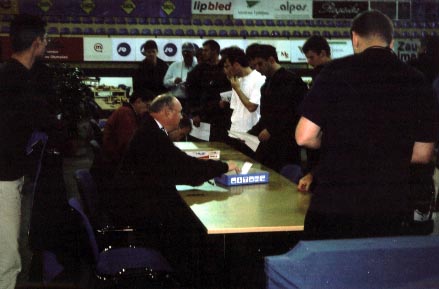 Just before the commencement of the games, the sports hall was a buzz of activity with a sea of bodies. The men’s teams played in the Southern part of the venue and the women in the Northern section. The matches would start after the chief arbiter in his Dutch-accented English would welcome everyone and then almost gleefully say “arbiters start your clocks” after which about one hundred (100) sodniki (arbiters) would hurry to press the “start” button on the various time pieces.

After the round had ended, about 7:00 p.m. each day, a list of the formal results and the pairings for the next round would be posted at strategic points (e.g., the press centre) and/or mailed to the respective hotels or venues housing the teams. It was sometimes amusing to see adults eagerly awaiting the pairings like children awaiting gifts at Christmas time.

On any given day there were sixty-seven (67) matches in the men’s competition, that is five hundred and thirty-six (536) players with approximately one hundred and eighty (180) grandmasters (GMs)! 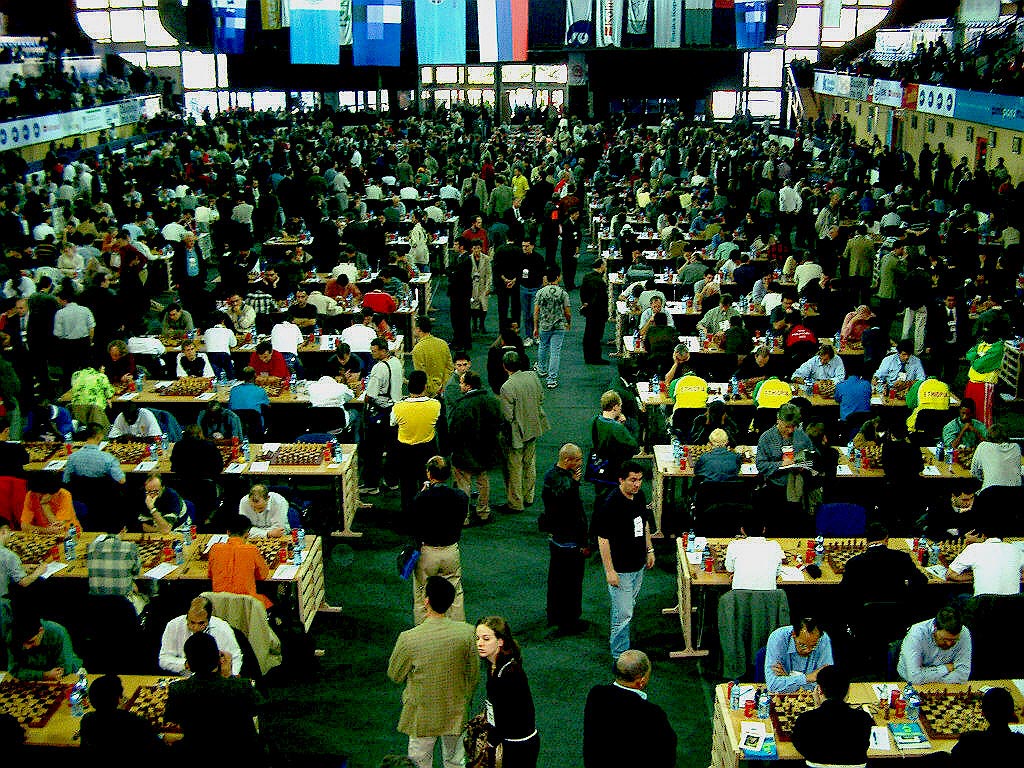 In the women’s competition there were forty-five (45) matches each round with two hundred and seventy (270) players. From my recollection only three “outright” GMs, namely China’s Zhu Chen, the world female champion, Georgia’s Maia Chiburdanidze, former world female champion and Bulgaria’s Antoaneta Stefanova played in the women’s section. “Super GM” Judit Polgar, of course, played on board two for Hungary in the men’s competition. Approximately sixty (60) Woman Grandmasters (WGM) competed in each round.

In summary, between the two competitions there were 403 games played each round. Each board was identified with the number of the match being played thereon and the names, titles and ratings of the competing players. After each game was finished the arbiter would normally indicate the result for all concerned to see by placing the relevant cards (e.g. “0”, ½ or 1) in the spaces allotted. At the end of the match the final result (e.g., Jamaica 4 Guernsey 0) would be indicated.

There is Life Apart from Chess: “The Tent”

Chess players showed that there was another side to their character. There was a lot of partying at various venues and a lot of drinking. Beer was one of the chief “victims”.

After each round, many players relaxed by visiting the tent which was erected about 30 yards from the Hotel Krim and just a few yards to the east of the playing hall. There were many vendors in the tent selling chess books, equipment and software. The location, however, was particularly attractive because of the seemingly endless supply of food, drinks (alcoholic and otherwise) and music. The bar annexed to the playing hall was also a common meeting ground where players would relax, chat and have a few beers. Salud Señor Wheeler!

Rastafarians would have cringed because on a regular basis one would pass the tent in the mornings or during the days and see a whole pig being roasted… spinning inexorably over the fire. We concluded that Slovenes loved meat, especially pork. Sausages were standard fare.

Lake Bled was the essence of natural charm and is one of Slovenia’s greatest attractions. Many players took the time to walk around the Lake (approximately a 90-minute walk) and to enjoy the beautiful flowers, lush vegetation and breath-taking scenery. Trips to the nearby castle were also frequent. 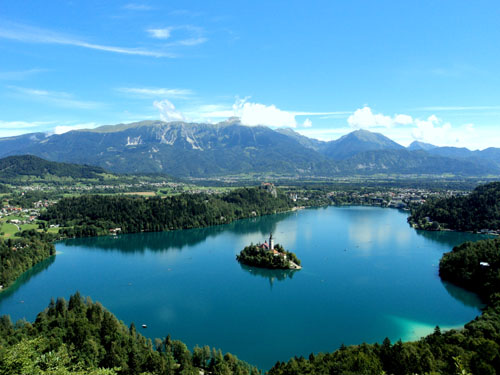 For me there were some disappointing moments at the Olympiad and I now list a few:

“Jamaica’s highest rated player is to be commended for making the trip and representing his country although he lost his mother only a few days before the Olympiad started.”

“Gwaze’s play epitomized the exciting nature of chess when it is played in positive and/or uncompromising fashion.” 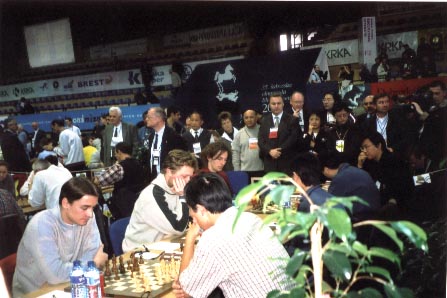 The Bears (Russia) vs. The Dragons (China) 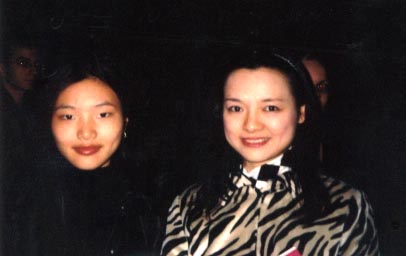 Hanging with the beautiful African brothers and sisters, especially those from Botswana, Zambia and Zimbabwe. Woweee those sistahs were fine! 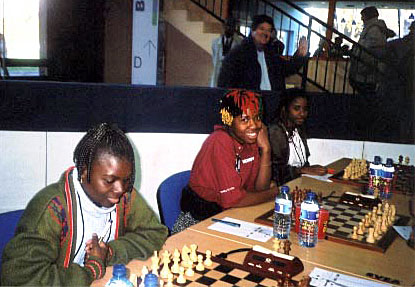 It was with mixed feelings that I left Bled. I was, of course, happy to return home but I was very sad that it was all over. The ambience and atmosphere of the playing hall, the press centre, the view of the Alps and Lake Bled, the players milling around, meeting and greeting each other, furrowed brows searching for the truth at the chess board are images which will remain with me forever.

In my humble opinion the 35th chess Olympiad was a resounding success. One only hopes that the 36th edition scheduled for the island of Minorca in 2004 will be even better. 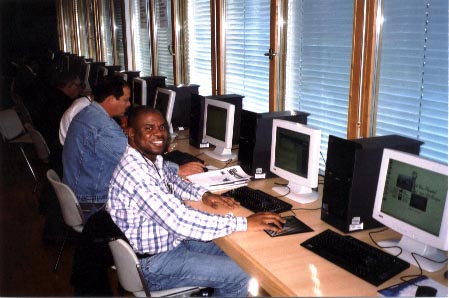 Metaphysics of the Chess Mind