“Trashing Talking” is a very common pastime among Black sportsmen, and the demure sport of chess is no exception. Particularly amongst Black players here in the U.S., you can walk into a club with players engrossed in a tense battle interspersed with chess banter and laughter. Perhaps you’ve been a participant in these spirited exchanges. There’s something about this phenomenon that brings out the highest intensity in a blitz set or analysis session. It makes the sport of chess so entertaining, yet instructive.

I have been witness to some of the most hilarious sessions in skittles rooms that are now legendary. Players often make up their own chess vocabulary, name openings after themselves, and assign their rivals nicknames . . . all in fun. While it’s common to hear chess players calling each other every type of fish from a guppy to a whale, what makes a man do impersonations of Bruce Lee or Darth Vader during a blitz set? It’s the chess spirit!

FM Emory Tate is a skittles room icon as he often entertains spectators with his animated analysis of some game he’s played (usually a GM he’s smashed). His analysis sessions are hyper-creative and he’ll pepper his vivid commentary with “triple exclam!” while rattling off a series of moves with a quickness, and then announce mate in five. Obviously brilliant, Tate will sometimes will start speaking Russian (he’s fluent), or some other language during his analysis. In blitz, Emory generally draws a crowd with his crazed tactical style bringing “oooohs” and “aaaahs” and bursts of laughter. 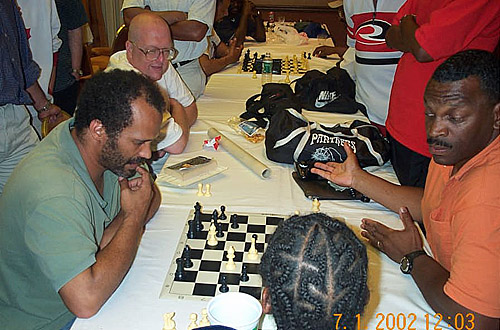 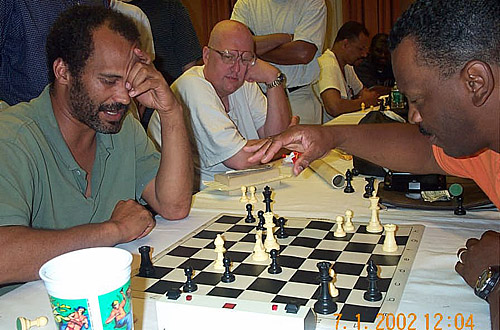 Emory Tate exchanging blitz banter with Herbert Carswell at 2002 World Open in Philadelphia’s Adams Mark. There was a throng of spectators watching the entertaining spectacle. Photos by Daaim Shabazz.

Although I hear IM Odion Aikhoje of Nigeria is quite a character, the funniest chess player I’ve ever seen is NM Marvin Dandridge of Chicago. Back in the day, Marvin would sing any number of songs, commercials, and do all types of impersonations with different accents . . . all while mating your nose. He’ll yell “MATE! Ahhh yeaaah!” as the whole club would laugh hysterically. You couldn’t help but to laugh along, because Marvin has such a wonderful personality. It’s guys like Marvin that will keep you coming to a chess club because he’s a strong player and brings an infectious spirit into the environment.

An interesting story I heard was that a high-profile player and U.S. champion sat at the board to play an unassuming Black player who happened to be 2300 strength. The U.S. Champion blurted out, “What’s your rating fish?” Astonished, the master curtly replied, “Thirty-two points higher after this game!” With all the motivation that he needed to win, the master was victorious and rating went up 32 points after the game.

Of course, GM Maurice Ashley’s chess commentary in the Kasparov-Deep Blue earned him rave reviews as the audience were enthralled by his knowledge, charisma and quick wit. Maurice probably honed some of those skills in those late night sessions with the Black Bear Chess Club in New York where egos were bruised and rebuilt in marathon overnight board fights.

I have fond memories of my own blitz episodes, but one was unique in that my last taunt was unspoken. Many years ago while in high school, I played a person from our arch-rival school at Tuley Park chess club in Chicago. 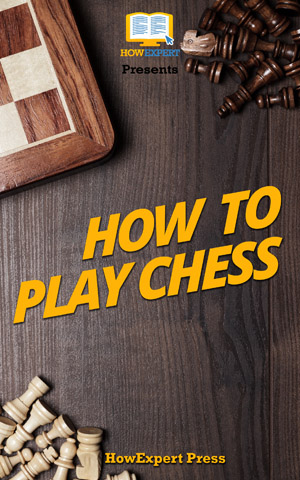 The battle was intense and trash-talking was rampant. After the blitz set, I calmly handed the player a folded sheet of paper. He unfolded the sheet of paper, looked at it, glanced at me, and rolled his eyes. It was instructions on “How to Play Chess.”

One other time I arrived at Tuley Park and a strong player (former high school standout) named Melvin Alsberry walked up to me and asked, “Are you ready for your beating?” I jokingly thought, “Oh… what a compliment! Let’s roll!” Chess opens up a world for many of us to express our creative humor in the spirit of the sport. On rare occasions, chess banter can become divisive and mean-spirited, but when it is done amiably and in good spirit, then both participants have a great time. . . and we have fonder memories of “locking horns.”