Superlatives were bandied about to describe Sergey Karjakin’s defensive prowess after holding Magnus Carlsen in a 94-move bout. Peter Doggers of chess.com quipped that Vladimir Putin should hire him as “Minister of Defense” after which Karjakin said (with a wry smile) he’d be honored. Certainly Karjakin was glad to have escaped yet another unpleasant outing and didn’t mind all the cliches in social media… overused yet again.

For the 2nd game in a row, Karjakin has emerged from the brink of losing. Who does this result favor more? #worldchess2016 #CarlsenKarjakin

Many felt that this result may have helped Karjakin’s confidence since he has scored two moral victories, but Carlsen said without a tinge of doubt that he would rather be on the offensive than having to defend such positions. Certainly, the world champion has to be happy with the positions he has been getting and is showing his superiority in technical positions. Zambian GM Amon Simutowe opined,

I am beginning to think Karjakin might pose Carlsen some real challenges in this match. While Carlsen has controlled the games in the first four matches, I am not sure it’s a good sign if a player of Carlsen’s caliber fails to convert at least two games in which he has an advantage into a win. On the other hand, if the trend of Carlsen dominating the games continues, he should win the match.

For the third game in a row, there was a Ruy Lopez, this time an anti-Marshall system with 8.h3. This is an attempt to side step the uber-complicated sequences after 8.c3 d5!? 9.exd5 Nxd5 10.Nxe5 Nxe5 11.Rxe5 Bd6 12.Re1 Qh4. Karjakin has extensive experience with this theory. 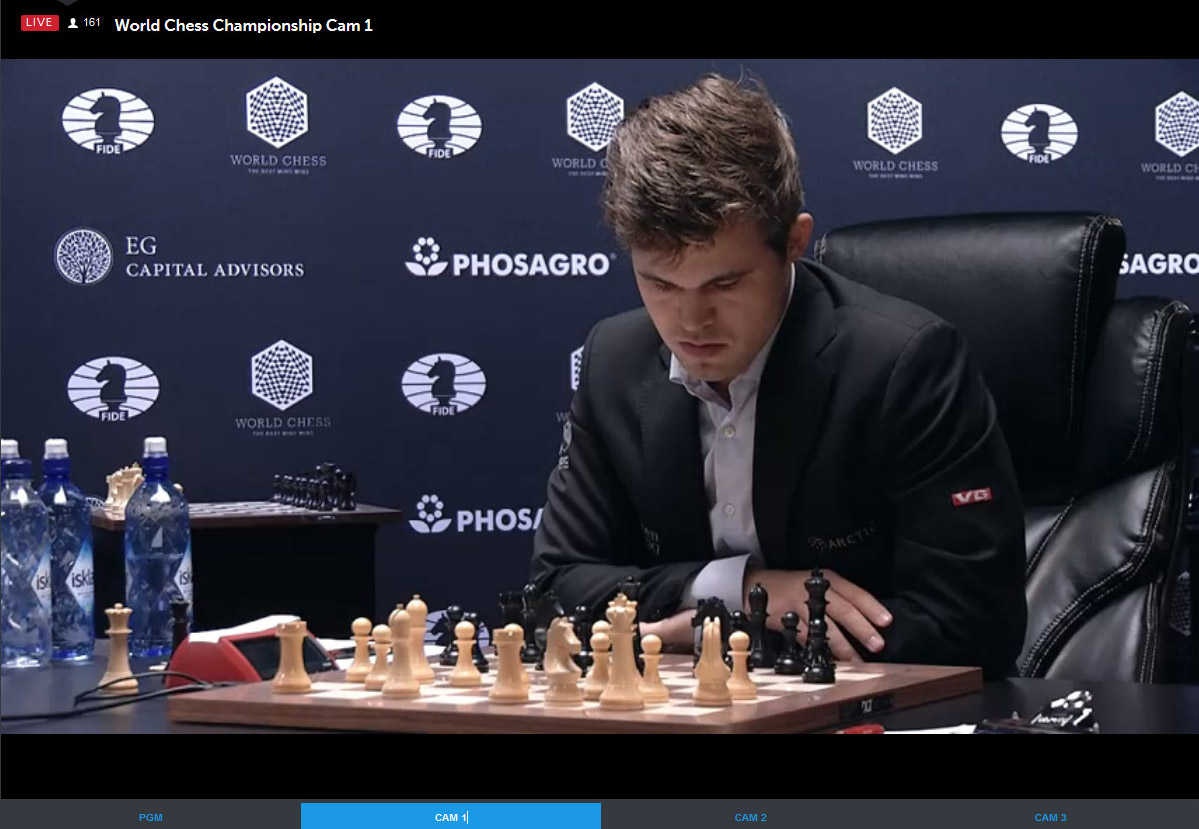 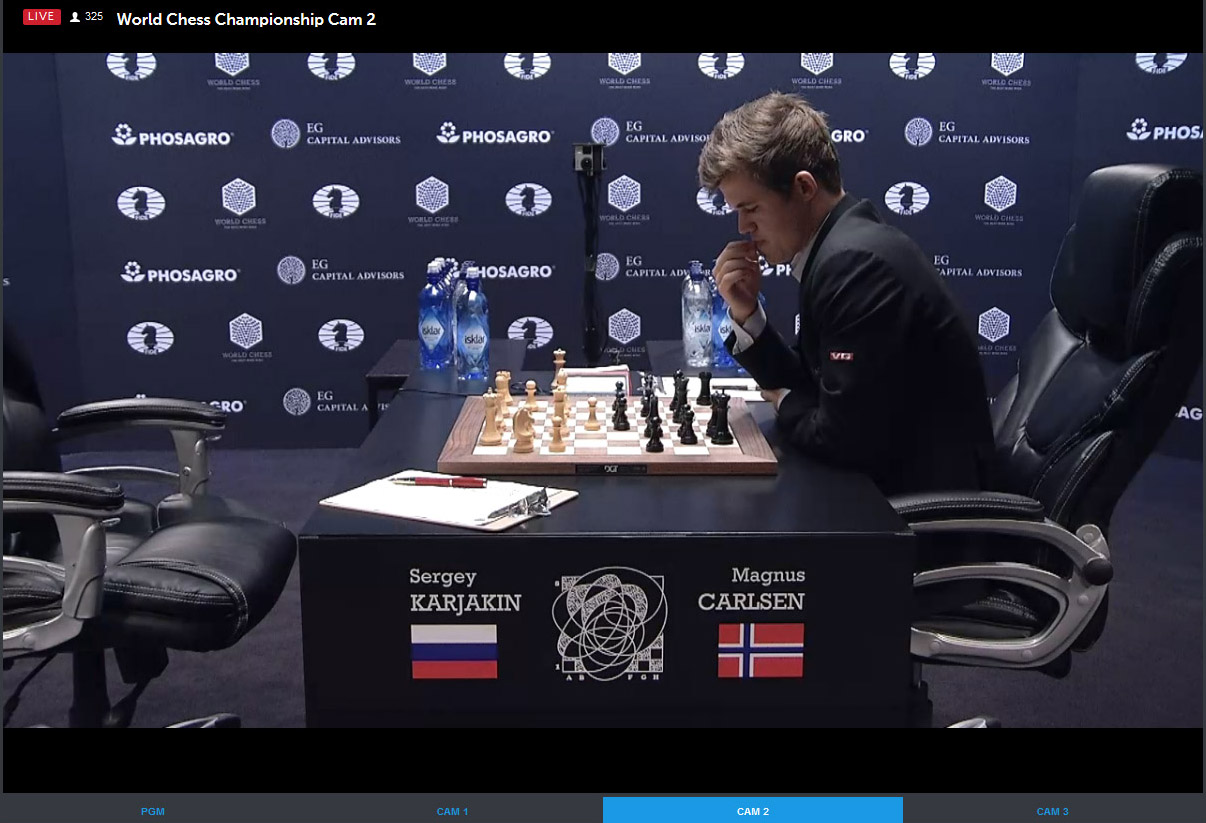 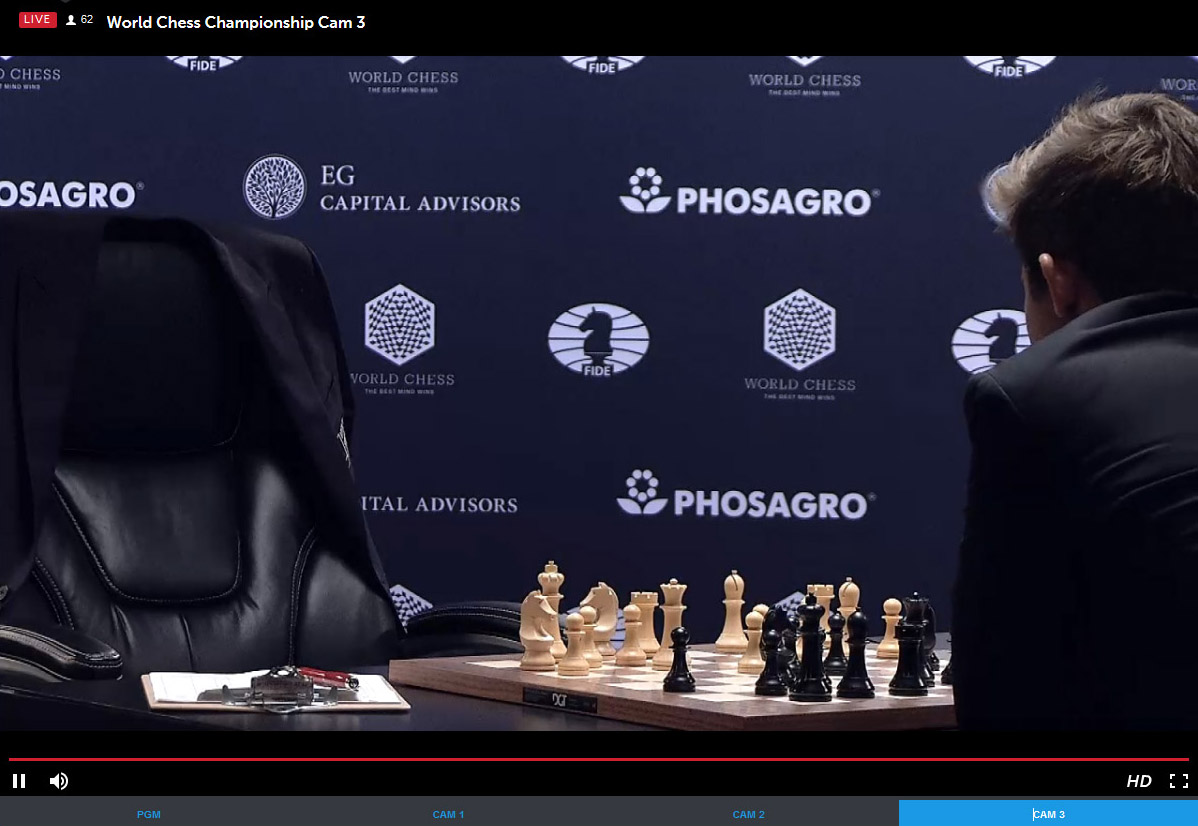 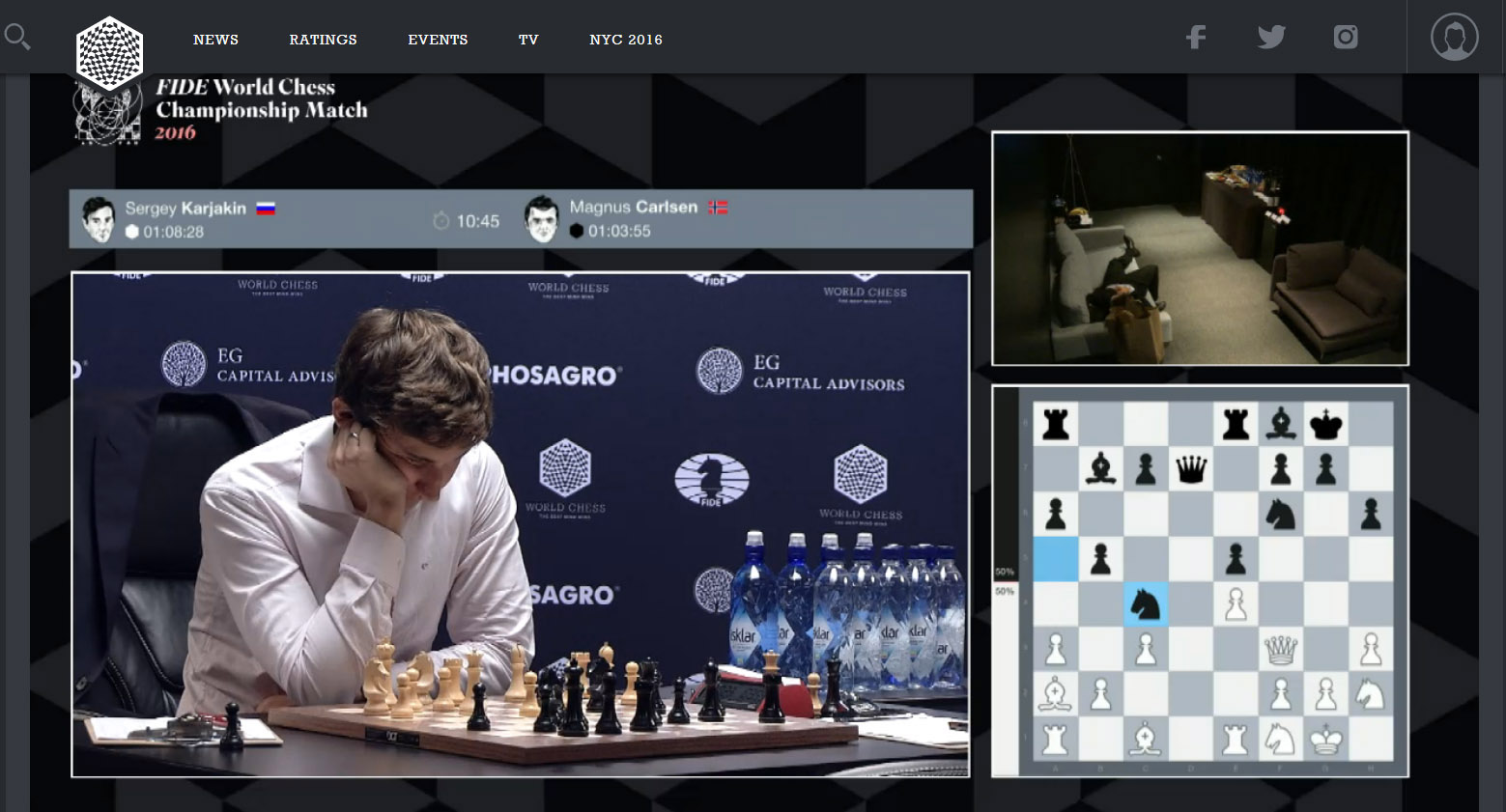 Carlsen takes a nap on the couch before Karjakin’s fateful 18th move.

Indeed the Russian was comfortable and appeared to have his bearing well into the complicated jigsaw of pieces typical of the Ruy Lopez middlegames. Then, the moment came… 18.Bxh6? Karjakin had been goaded into a gluttonous blunder which was curtly refuted with 18…Qc6! 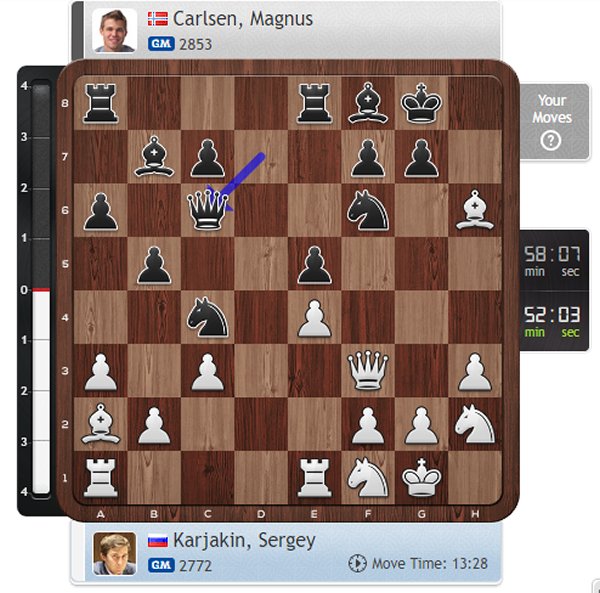 Zoiks! The response on social media exploded. Now black simply threatens 19…gxh6 and 19…Nxe4. They say mistakes happen in bunches and Karjakin interpolated the move 19.Bxc4?! which ceded the b3- and d3-squares. The alternative 19.Bc1 was needed.

After 19…bxc4 20.Be3 Nxe4 black’s pieces got a huge dose of oxygen and Karjakin was on the brink of a dashing defeat. He had to get a grip on his position … and fast! One of the most admirable qualities of the challenger is to have the nerves of steel when under pressure. He opted to swap queens, but after 25.Ng4 Rb5 26.f3 the laser bishops were poised to slice his knight duo to shreds.

Karjakin started to venture into time pressure where one more slip could mean an immediate loss. He decided to temporarily jettison a pawn to activate his knight. After the 40th move, it was clear that white was going to suffer and Carlsen was the type who would play 100 moves. Tension continued to mount and after white’s 45.Nd1 black played 45…f4?

Carlsen thought his was winning easily, but 45…Be6! was the killer. “I don’t believe white can save this position,” said Karjakin in the press conference. This turned out to the the last chance for Carlsen and after another 40 moves, Karjakin held the fortress. Drats! Carlsen foiled again.

So… going into a rest day Russia has to be feeling good and Karjakin more confident. With each draw, Karjakin is going to increase his chances of a match upset. For Carlsen, he must be disappointed to have missed these opportunities. When Anand missed his big chance after Carlsen’s 26.Kd2?? (losing two pawns to 26…Nxe5!). Anand was visibly shaken and went down 12 moves later.