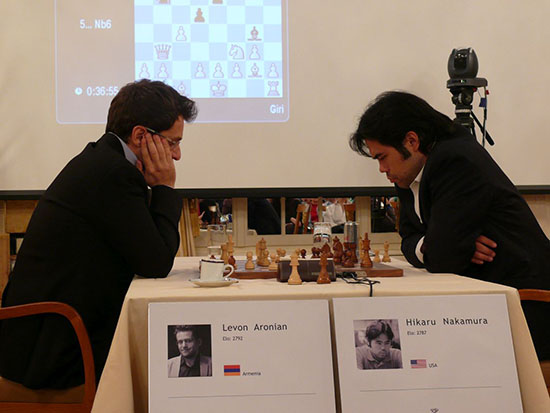 Normally a tough opponent for Hikaru Nakamura, he was able to sweep past Levon Aronian en route to another tournament victory. Photo by Frederic Friedel.

Just after defending his Gibraltar title, Hikaru Nakamura went to Zurich with the same task. The same task ended with the same result… another victory! Nakamura bested Viswanathan Anand for top honors via Sonneborn-Berger (SB) tiebreaks. Last year, both Nakamura and Anand tied, but played an Armageddon tiebreak match and the American won.

This year a controversial decision to opt for the SB method. Zurich will have to get its act together in future editions. Two years in a row of sheer confusion. Nevertheless, Nakamura will certainly be happy for this victory as his play was a bit spotty today surviving a bad position against Anand. On to Moscow for the Candidates! Half of the participants in Zurich, but Nakamura certainly has the momentum.

One Response to “Nakamura gets a Double-Repeat!”