The first event of the Grand Chess Tour has finished with the old guard still showing that they are a viable force. Veselin Topalov and Viswanathan Anand drew their last round encounter giving them both 1st and 2nd place in the first leg of the new elite event.

Topalov had a fortuitous start with a won over Magnus Carlsen who was unaware of the time control and flagged. This apparently affected the world champion as he dropped another game in the second round to nemesis Fabiano Caruana. After compiling only 1/2-point in the first four rounds, the chess world was in total shock. Meanwhile Topalov, Anand and Hikaru Nakamura were in solid form. 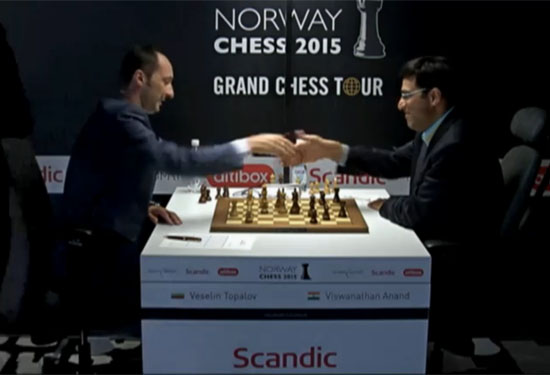 What is interesting about this tournament was the fact that the two oldest competitors ran the tables and proved that they could still play steadily against top competition. On the other hand, top seeds Carlsen and Caruana struggled mightily. Caruana made a number of uncharacteristic blunders including the 40…g5?? blunder against Nakamura and a gross misjudgment against Levon Aronian.

Carunana finished on -1 and has been in a bit of a free fall on the Elo list tumbling from his perch of 2851 reached last October. Carlsen has also hemorrhaged points losing 23 points in this tournament alone. The champion had a chance to draw even in the last round but was beaten soundly by tail-ender and compatriot Jon Ludwig Hammer. 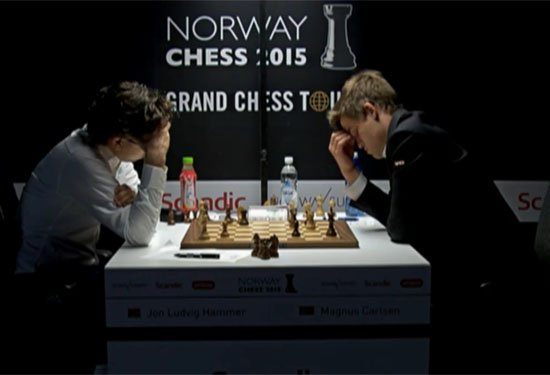 Carlsen close to resigning against Hammer.

It is with a certainty that future championship matches will not be played in Norway as long as Carlsen is the champion. He simply does not perform well on his home turf. It is possible that he will have to defend his title in the U.S. against an American! Nevertheless, Carlsen has two more events and will return to the U.S. to play in the Sinquefield Cup in August.

There were no breakout performances this year and the result was in doubt all the way until the 8th round when Nakamura failed to convert an advantage against Alexander Grischuk. After that, Topalov moved to 1.5 points ahead of Nakamura and meant either he or Anand would score the victory regardless of the result. Despite barely missing a chance to vie for 1st place, the top American was pleased with his play and builds on his outstanding year. He is now at a career high Elo of 2814.

These five battled at 2014 Sinquefield and will return in August!

Topalov was ecstatic and admitted to being the recipient of great fortune in a few of his games. However, he stated in an interview that it is very difficult to maintain the focus of 20 years ago and that he was pleasantly surprised at his performance. Both he and Anand seemed to be supportive of each other in these observations. However, Anand is playing better than he has during his champion years… which is bad news for the rising stars. We will certainly see if the field (and possibly Wesley So) will come to St. Louis with vengeance in their hearts.