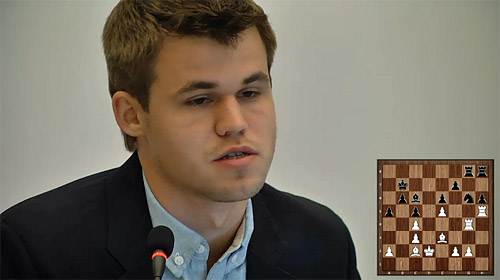 The chess world is still buzzing on social media about today’s game in which blunders were traded. After having played a rather unambitious version of the Kan Sicilian, Viswanathan Anand allowed Magnus Carlsen to create pressure on the kingside and tried to solve his problems tactically. While white had the advantage, it appeared that black would be able to mount adequate counterplay. Then the unthinkable happened… the move that sent tremors around the chess world… 26.Kd2?? was played!! 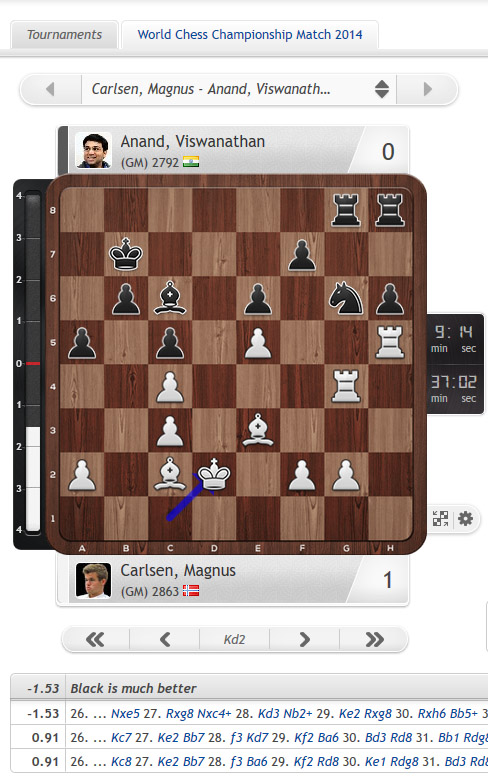 26.Kd2?? will now become an infamous footnote in history.

Kd2 must be a transmission error, right?

You can clearly see Carlsen pause to write move after making it. Then when Anand played 26…a4, he put his head down in disgust… twice!

No… it wasn’t a transmission error and 26.Kd2?? was on the board. Anand took little time to play 26…a4?? to a sigh of relief of Carlsen fans… and of course Carlsen himself. Why? Because Anand had missed a rare opportunity at this level to win a game for free with 26…Nxe5! netting material after 27.Rxg8 Nxc4+ 28.Kd3 (28.Ke2 Rxg8 with the advantage) 28…Nb2+, recapturing the rook and then hitting g2. Whenever a player (at any level) realizes such a missed opportunity it is hard to keep composure in the game at hand. Anand must’ve been rattled and begin to go downhill quickly.

There is no way to explain the double-blindness that occurred other than the human element of fear, nervousness and tension accented by adrenalin infusion. One can have a blind spot in any given game, but it rarely happens at world championship level. Carlsen, who looked a bit disturbed at the beginning of the press conference, could not explain his error, but mentioned that he saw his blunder immediately after completing the move. “That’s always the way it is,” he stated. In his immense respect for Anand, he restrained his glee until the end and finally broke a smile.

Anand was visibly shellshocked but could only offer that “when you’re not expecting a gift, sometimes you don’t take it.” True enough, but this was no ordinary gift. He offered that he was fixated on the …a5-a4-a3 idea during the game. Due to the egregious nature of the errors, the press conference focused on the Kd2 blunder with several permutations of the same question. Anand handled the situation quite admirably. Press Officer Anastasia Kharlovich had to finally tell the journalists to move on to other questions besides “Kd2”. Of course, there would be one more after that.

“When you’re not expecting a gift, sometimes you don’t take it.”
~Viswanathan Anand

This has to be a setback for Anand since there is no amount of preparation that can correct this. Of course, Anand could have played a more ambitious line of the Sicilian, but he will have to face white again after the rest day. Anand has come back many times in his career including in this very match where he matched Carlsen’s win with one of his own… in brilliant fashion. He and his team will have to find the chink in Thor’s armour… a suit that does not seem impenetrable.