Magnus Carlsen has opened up a two-point bulge in the sixth game of the World Championships shellshocking fans all over the world… and Anand himself. The past two games lost by Anand in rook endings followed two contentious games where both sides got winning positions.

Today’s loss in a Ruy Lopez Breyer certainly puts Anand on his heels. He was hoping to put in a strong performance today, but got little in the opening. Anand sacrificed a pawn and tried to create a barrier, but Carlsen deftly shifted the focus on the kingside by sacrificing a pawn to free his rook. He penetrated the kingside with his king. With the game hanging by a thread, Anand blundered with 60.Ra4 and Carlsen was able to push the pawn through. 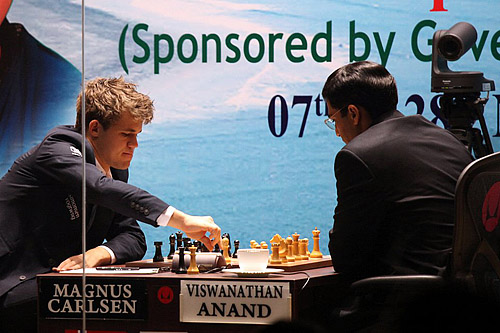 Carlsen continued to press and his persistence was rewarded.
Photo by Anastasia Karlovich. 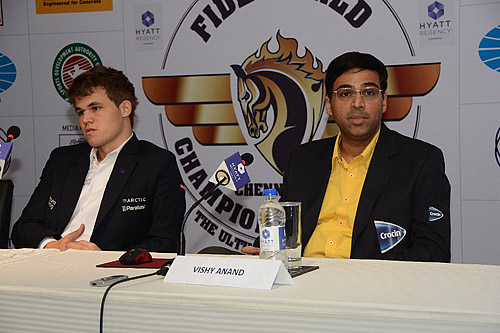 The press conference was a forgettable one for Anand.
Photo by JM Mahesh.

After the loss, Anand was visibly irritated at the seemingly endless stream of awkward questions. He had just lost a tough battle, had fallen behind two points and had to go immediately to the press conference with emotions still swirling. After a series of lackluster questions, a Norwegian journalist asked how he planned to come back after such a deficit. Anand replied vaguely, “I plan to do my best.” It was obvious that he was not in the mood and his answers were rather abrupt. After a couple of questions, the same journalist then asked him to elaborate on how he would do his best. Anand replied, “Doing your best means doing your best. I don’t know why you don’t understand English!”

I heard from Indian journalists here in Chennai. They had never ever seen Anand like that in a press conference. #AnandCarlsen

Anand’s reaction was totally out of character, but it follows a trend of poor choice of questioning by journalists throughout the entire event. It was with such shock since Anand is normally unflappable, but the pressure is clearly mounting. In the second half of the tournament, Anand will have to find a different approach to his openings. He will undoubtedly get calls from several strong players on possible ideas. Of course, Anand still has to play the moves and losing two drawn ending may point to other issues.