Women’s Grandmaster Yana Melnikova wrote an essay titled, “Carlsen, Topalov? Kramnik?” It dealt with the awarding of Olympiad medals. She endorses the awarding of medals on total performance rating (TPR) and admits that it limits the pool primarily to the top players such as Carlsen, Topalov and Kramnik. This is correct because performance ratings are based in great part on a player’s history. 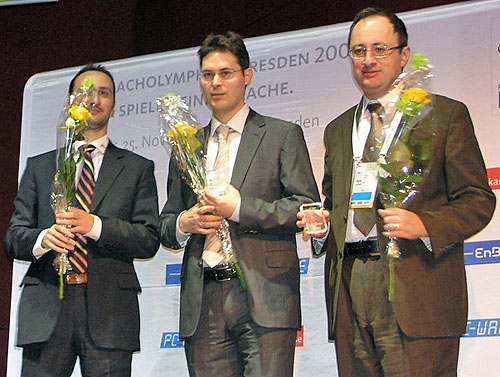 In some cases, the players with the highest performance rating will also have the best percentage. A player’s win percentage is obviously based on win-loss record. However, awarding solely by TPR means that those players not playing for an elite nation will have little chance of winning an individual board medal despite their best possible score.

In her essay, she states,

For many years it was impossible to predict the winner of the first board competition, because it took into account the best percentage score, so a relative unknown player who defeated other unknowns had a good shot at the prize. Today the rules are different – the prizes are awarded according to the rating performance, which seriously narrows the group of favorites. Let us try to make some predictions.

Recognizing an unknown player can be a good thing. In fact this appears to be what the Olympiad advocates. It gives an unknown player who has had a spectacular performance their proper recognition. There is no other tournament that can accomplish this. In my essay two years ago, here were my thoughts,

The chess community understands and appreciates the excellence of professional players. They have a long history of accolades and their success, to a great degree, this is expected. However, if an unknown player from Vanuatu, the Maldives, Comoros or Liberia happens to score 9/10 or 11/11, there should be a way of recognizing this feat on the largest stage in chess. We may have uncovered the next rising star.

When IM Robert Gwaze of Zimbabwe scored 9/9 (2690 performance) at the Bled Olympiad in 2002, it stood as one of the brightest moments of the tournament. In Dresden, he would not have received a mention. The success of smaller federations can help the global appeal for chess. This will also help all chess nations advance their own initiatives. In my view, this is what GENS UNA SUMUS is about. (see essay)

In my view, there has to be a way of being more inclusive in the awarding of medals. It would provide tremendous incentives. However, if FIDE is concerned about lower-rated player piling up huge scores, they should make some adjustments in the criteria so that all players (not just the elite) have a reasonable chance as scoring a historic victory. Who knows what lies ahead for a medal winner from the UAE, Fiji or Costa Rica? This gesture can be a boon to chess and help us gain more global appeal, sponsorship and goodwill. For a developing small federation, a medal can help keep the public interest for a long time. It is worth considering for future Olympiad tournaments.

5 Responses to “Awarding of Olympiad Medals”