‘Tireless Tate’ on the beaten path! 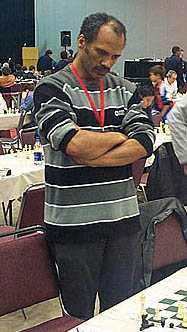 IM Emory Tate has made clear that his goal is to make the title of Grandmaster. He has traveled through Europe; he has played in large opens; he has played in closed invitationals; he has played in weekend swisses. Currently he is playing at the Gem City Open in Dayton, USA. He no doubt will be present at the World Open in a couple of weeks.

What is interesting about Tate’s activity is that he has continued to maintain his energy over the past couple of years. Of course, it would be much better if there were more opportunity for GM norms within geographical reach… quality vs. quantity. Tate may be headed to Dubai to play in an invitational and hopefully sponsors will continue to realize his value to tournaments.

Following is a drawn game he sent in with Alexander Goldin played in Dayton, Ohio.

31 Responses to “‘Tireless Tate’ on the beaten path!”